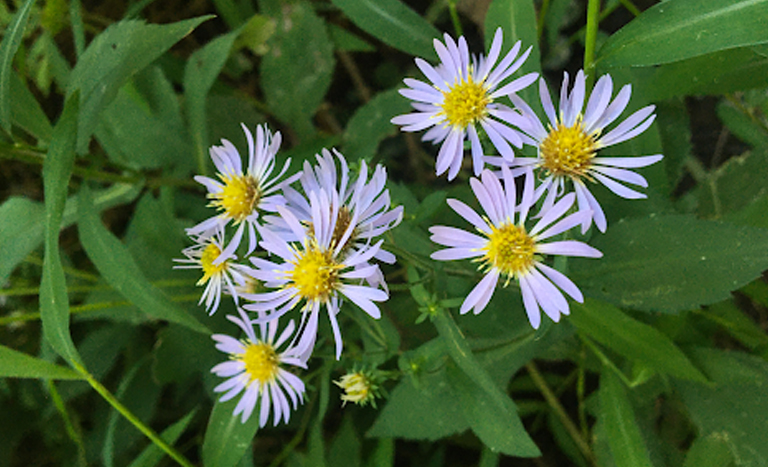 Hey, it’s me, Aengus, back with another blog post; today’s topic is early fall wildflowers.

The wildflowers growing along the Normans Kill, even in fall, are still quite abundant, providing a harvest tableau of yellows, whites, and purples. The most prevalent kinds of flowers are the aster and goldenrod varieties that characterize fall growth (and fall pollen allergies), but other varieties are still visible in addition to hangers-on from the late summer.

White snakeroot is a small white flower that grows in much of the northeastern US. The flowers and leaves provide food for many pollinating insects and caterpillars; however, the bitter taste of the leaves deters larger herbivores. Settlers believed the root to cure snakebite–however, it is highly toxic to humans. It has been documented as causing “milk sickness” due to cows passing the ingested toxins out through their milk, thus poisoning it.

New England asters are a bright pollinator favorite and are found at multiple points along the trail. They are deer resistant and have spread through much of the continental US due to their aggressive seeding.

Rough-stemmed goldenrod, Blue-stemmed goldenrod, and Canada goldenrod are widespread throughout the preserve, and there may be other goldenrod species that I missed. Goldenrod is notoriously difficult to effectively identify as there are over 200 closely related species, with some species only differing in one or two characteristics. Goldenrod, while a fall allergen, is not as commonly believed the cause of hay fever. Hay fever is instead caused by ragweed. Due to goldenrod’s abundance, multiple species, most notably goldenrod spiders, have developed camouflage specifically for living in goldenrod. Goldenrod was used by ancient physicians to attempt (with varying levels of success) to treat various ailments but is now regarded as a wildflower at best–and at worst, as a pest.

The heath aster, characterized by its small leaves covering the stalks, provides food for a variety of pollinators and larger bird and mammal grazers such as turkeys and rabbits.

Small white asters look like patches of tiny daisies but are all flowers branching from a singular plant. Sometimes called spray asters, they can be easy to miss but decorate the lower edges of the trail and many fields across the eastern US.

Late purple asters are the brightest asters you will find at the preserve. Characterized by their spade-shaped leaves, these plants are sure to grab your attention.

Jewelweed is a widespread flower found across much of the US and one of the few plants known to out-compete invasive garlic mustard. It is often one of the first colonizing plants for recently disturbed areas. Jewelweed has some flowers that never open and self-fertilize, generally making weaker plants but allowing continued propagation even without nearby plants. The sap of the plants has been shown to have benefits in treating both skin irritation and fungal growths and can be used against athletes’ foot.