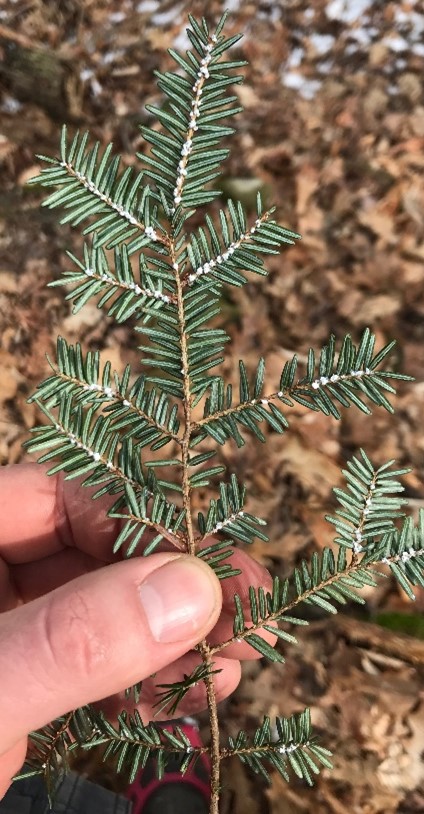 Look! In the tree! It’s a spider egg, it’s mold, it’s...cotton?! No, it’s Hemlock Woolly Adelgid, aka, “HWA”.  A bizarre and highly destructive introduced forest pest insect, that has been decimating our beloved Eastern Hemlock trees all up and down the eastern US and Canada.

The seemingly benign, cottony mass that is the most identifiable feature of HWA, is actually a protective mess of waxy filament produced by the creature within, an adelgid, (pronounced: “uhdell jid”). Adelgids (family: Adelgidae) are tiny insects very similar to those pesky, and better-known, aphids. Much like aphids, adelgids have piercing/sucking mouthparts that they use to penetrate plant tissue and feed on the sap and nutritious fluids within. The adelgid within the woolly mass is not nearly as cute to look upon, nor as cuddly as its name suggests, and an infestation of these can kill an ancient hemlock tree in as few as four years.

What we know as HWA here in New York, is a species of adelgid that was accidentally introduced in Virginia, sometime in the early 1900’s, likely on some horticultural stock from its native range in Japan. There are actually many species of adelgid worldwide, some of which are native to our neck of the woods, such as the Pine Bark Adelgid, and these typically are not destructive or problematic pests. HWA has become such a huge issue here because our native Eastern Hemlock, Tsuga canadensis, did not coevolve with HWA, and therefore has no natural resistance nor are there any local predators on the landscape that feed upon the HWA keep it in check. This lack of natural control paired with the fact that HWA reproduces asexually (and with two generations per year!), is why the problem has spread so far, so fast. A single Hemlock Woolly Adelgid, once settled on a hemlock, can start off a population that will quickly infest the entire tree.

Unlike many of the forest pest issues confronting tree lovers and natural resource managers these days, there are viable options to protect our hemlocks and slow the spread of HWA. Historically, the spread of HWA in NY has been stymied by our cold winters, especially in high elevation areas like the Catskills and Adirondacks. As HWA is primarily active during the winter months, it is vulnerable to extreme cold temperatures and cold snaps, which are becoming less frequent due to our changing climate.  Experts have broken down the solutions to combat HWA into short- and long-term strategies. The short-term option is the use of systemic, chemical pesticides that kill off the HWA and preclude it for up to seven years with a single treatment.  There is considerable controversy around this method as the most utilized class of chemicals in this strategy are neonicotinoids, which are often pointed to as the enemy of pollinator insects. The use of these chemicals for protecting hemlocks is well studied and supported in the expert community as hemlocks are wind-pollinated (not insect) so the collateral effects are minimal. That is a conversation for another time but I will say that the short-term protection of hemlocks is critical to long-term success.

The long-term strategy for combatting HWA is the use of biological controls. In this context, “biocontrol” refers to a suite of specialist HWA-predator insects. These are insects that are relocated from areas of the globe where HWA is a natural part of the ecosystem, to our forests here. I know this sounds like an irresponsible andironic solution (Old Lady Who Swallowed a Fly, anyone?). This approach, however, is meticulously regulated and studied prior to being carried out. As I said, these biocontrols are HWA specialists; they can only feed and thrive upon HWA. This is a long-term solution because it takes quite a while for these biocontrol predators to become established in the ecosystem. The idea is that once the predators have reached an adequate population size, they will balance out with the HWA, as predators and prey always do. There are several of these biocontrol predators being studied and utilized currently. In New York, this work has been underway for a while, you’ll begin to hear more and more, especially from me, about Little Lari’ (Laricobius nigrinus), and the SilverFlies (Leucotaraxis argenticollis & piniperda).

HWA will never be gone from our forests now that it’s here, but we can reach a point where it’s no longer spreading and consuming like wildfire. You can help in a very meaningful way by reading up on the controversies surrounding the use of chemical control for HWA, and learning how to spot HWA on the landscape and report it when you do.

Stay on the lookout for HWA tips, events, and resources from the MHLC and many of the other excellent partner organizations in the area such as the Capital Region Partnership for Invasive Species, the NY DEC, and the Office of Parks Recreation & Historic Preservation.