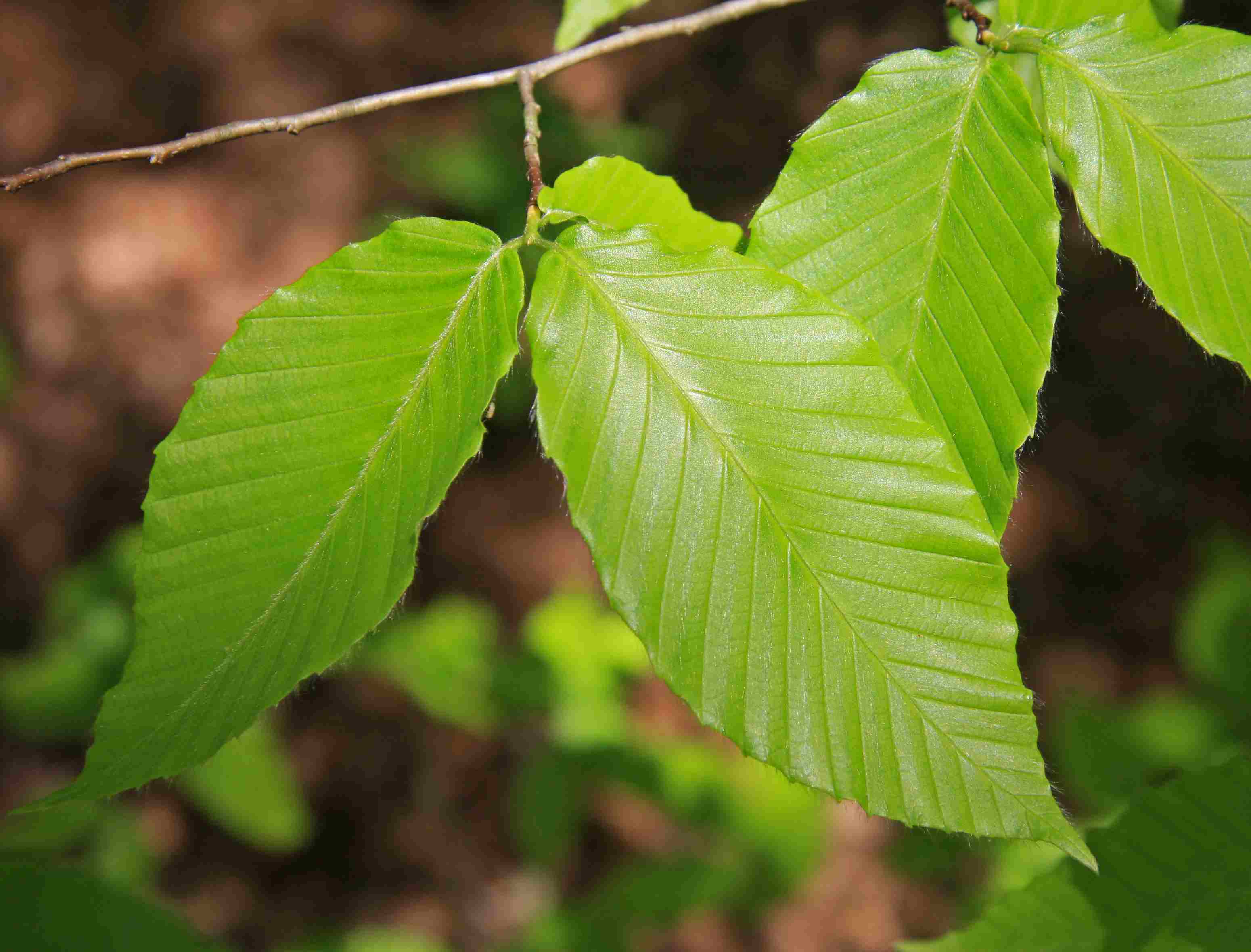 Enduring and immaculate, standing like so many pillars of carved stone, the American beech tree defines the classic graceful beauty of our northern hardwood forests. Beech is one of the most easily recognizable species due to its smooth, gray bark. While the bark of most trees thickens, flakes, and furrows with age and growth, beech is just the opposite, remaining smooth and clean from top to bottom at all ages and sizes. A prominent explanation for the smooth bark harkens back to its ancestrally tropical origins, where trees may have evolved to resist clinging vines and epiphytic plants; with smooth bark offering fewer “footholds” to the competing vegetation. Heavily textured bark, as with black cherry or sugar maple, is believed to be an adaptation to cold climates- and therefore beech can be susceptible to heavy-frost damage, sometimes visible as long splits in the bark. American beech is the classic target for starry-eyed lovers and aspiring woodland graffiti artists as the perfect medium in which to engrave initials and lasting messages. Because of carvings and bark diseases, the unblemished and smooth bark on beech trees is becoming a rare sight, indeed.

While it is a deciduous species (replacing its leaves every year), beech resists dropping its dead leaves in the fall; instead, they tend to hang on, like fluttering golden brown pendants, long into the winter, giving beech groves a shimmering appearance from afar. This leaf retention is called “marcescense” and can be observed in numerous trees including oaks and hophornbeams. The leaves themselves, living or dead, are alternatively arranged and can be identified by the symmetrical venation, coarsely toothed margins, and elliptical shape. Beech also produces distinctive copper-colored buds which are pointed, slender, and usually just under an inch in length, and which are very prominent in the winter months.

The beech is a shade-tolerant species and is found in close association with many other trees including, sugar maple, oaks, hickories, black cherry, yellow birch, eastern hemlock, tulip poplar, and American basswood. It can be found all throughout the eastern US and far north into Canada. A mature beech may reach heights well above 100 feet, and trunk diameters can approach 48 inches. American beech trees of this size are a rarity but not impossible to find in healthy, mature forests or in meticulously maintained ornamental settings. Gardens and parks often feature the European beech, Fagus sylvatica, with varieties offering deep purple foliage and weeping forms.

The relative abundance of beech is gradually increasing in our forests due to climate change, invasive species, and unceasing disturbance. Beech has a profound capacity for vegetative reproduction, usually in response to injury or damage, sending out stump sprouts and root suckers in abundance. With increasing frequency, dense beech thickets are found in forests. These thickets tend toward low-quality timber and small trees, and crowd out other species while resisting the worst of the deer browse pressure.

Much like oak and hickory, the American beech is a vital food source for wildlife. Beech nuts, produced in Autumn, are prized forage for game birds, squirrels, chipmunks, porcupines, black bears, raccoons, martens, and even foxes. The three-sided nuts are small (under an inch in length) and produced within an egg-shaped spiky husk. Beeches go through mast year cycles, producing massive quantities of the nuts every two or three years.

The utility of American beech timber is relatively high. While not necessarily known for rot resistance, the wood ranks quite high on standard hardness scales with a Janka [0-4,000] value of 1,300 as compared to the more popular Black Walnut (1,010) or Southern Yellow Pine (870). Beech grain displays an attractive cream color with a pinkish hue and is textured with a subtle ray flecking, giving it a unique character in woodworking projects. It also rates high for heating fuel, offering 21.8 mBtu (compare to Sugar Maple at 21.3 mBtu). In my relatively limited experience, beech makes great firewood but wavy grain and the increasing prevalence of imperfections and knots can make it a real challenge to split.

Like many of our native trees, the American beech is imperiled by exotic pathogens and disease. Today, it’s increasingly difficult to find a beech tree unmarred by puckering canker scars caused by Beech Bark Disease (BBD). Borne by tiny scale insects (one native, one non-native), the primary culprits of BBD are two species of Neonectria fungi. The scale, in sizeable infestations, may appear as a frosting or white dusting on a section of the trunk. Scale insects belong to a group of insects characterized by their piercing/sucking mouthparts (just like the Hemlock Woolly Adelgid), and this mechanical breach of the beech bark tissue enables colonization by the harmful fungi.

Once established within the tree tissue, the fungus produces noticeable red-orange cankerous blotches on the surface of the bark, which gradually become more numerous, changing the once smooth bark to a cracked and pitted mess. These wounds, when numerous enough may kill the tree, but also cause the weakened tree to be increasingly vulnerable to other fungal pathogens and wood-boring insects. There are few practical control options for BBD, which has been present in US forests since the early 20th century. There are some insects and fungi that may offer a biological control solution but they’re not hugely promising.  Insecticides and horticultural oils offer some management on select trees for the scale insects but aren’t practical at the forest level.

A newer, more sinister pathogen has caught the attention of scientists, forest managers, and beech lovers, all. Sticking to the established practical naming convention, this new pathogen has been given the moniker, “Beech Leaf Disease” (BLD).  First detected in 2012, in northern Ohio, BLD has since been identified in much of the Northeast, including New York, Pennsylvania, Connecticut, and Ontario. The NYS DEC has detected the disease in 32 counties so far. BLD is associated with an introduced species of nematode, Litylenchs crenatae mccannii. Nematodes, also known as roundworms, are microscopic and are the most abundant multicellular organisms on earth. While Beech Leaf Disease has been strongly associated with this particular species of nematode, the exact agent of the disease is still unclear, and maybe yet another fungal complex, as is the case with Beech Bark Disease.

Symptoms of BLD are somewhat difficult to describe, but quite distinctive when observed. Darker blotches and lesions will become apparent between the veins of the leaves, which would otherwise be a uniform healthy green. Irregularly thickened leaves, curling and puckering may also be observed. BLD can cause tree death in 2 to 7 years, moving more quickly in young trees. This disease also affects all species of beech, including the horticultural varieties. There are currently no solutions to BLD. The spread of the disease can, however, be limited by following firewood regulations and tree relocation laws. Suspected instances of BLD should be reported to the DEC and DEC pathology lab by submitting an iMap invasives report, emailing the DEC (foresthealth@dec.ny.gov), or calling the Forest Health Diagnostic lab (1-866-640-0652).

The roles of American Beech in northern hardwood and mixed forests will remain dynamic with the continued changes to our climate, introductions of nonnative pathogens, and increased human activity. The natural world is resilient and will proceed in varied paths around us regardless of what we throw at it. For now, the grace of the American Beech can still be appreciated to the fullest by visiting almost any of the MHLC preserves. Stay tuned for upcoming tree identification workshops, forest immersion events, and guided walks. As one of North America’s darling trees, an abundance of literature has been produced on the subject of the American Beech. I would recommend “Reading the Forested Landscape”, by Thomas Wessels, as an excellent starting point for learning more about the character of our forests. Much more information may also be found about the various Beech diseases (and more) by visiting the DEC forest health online resources.