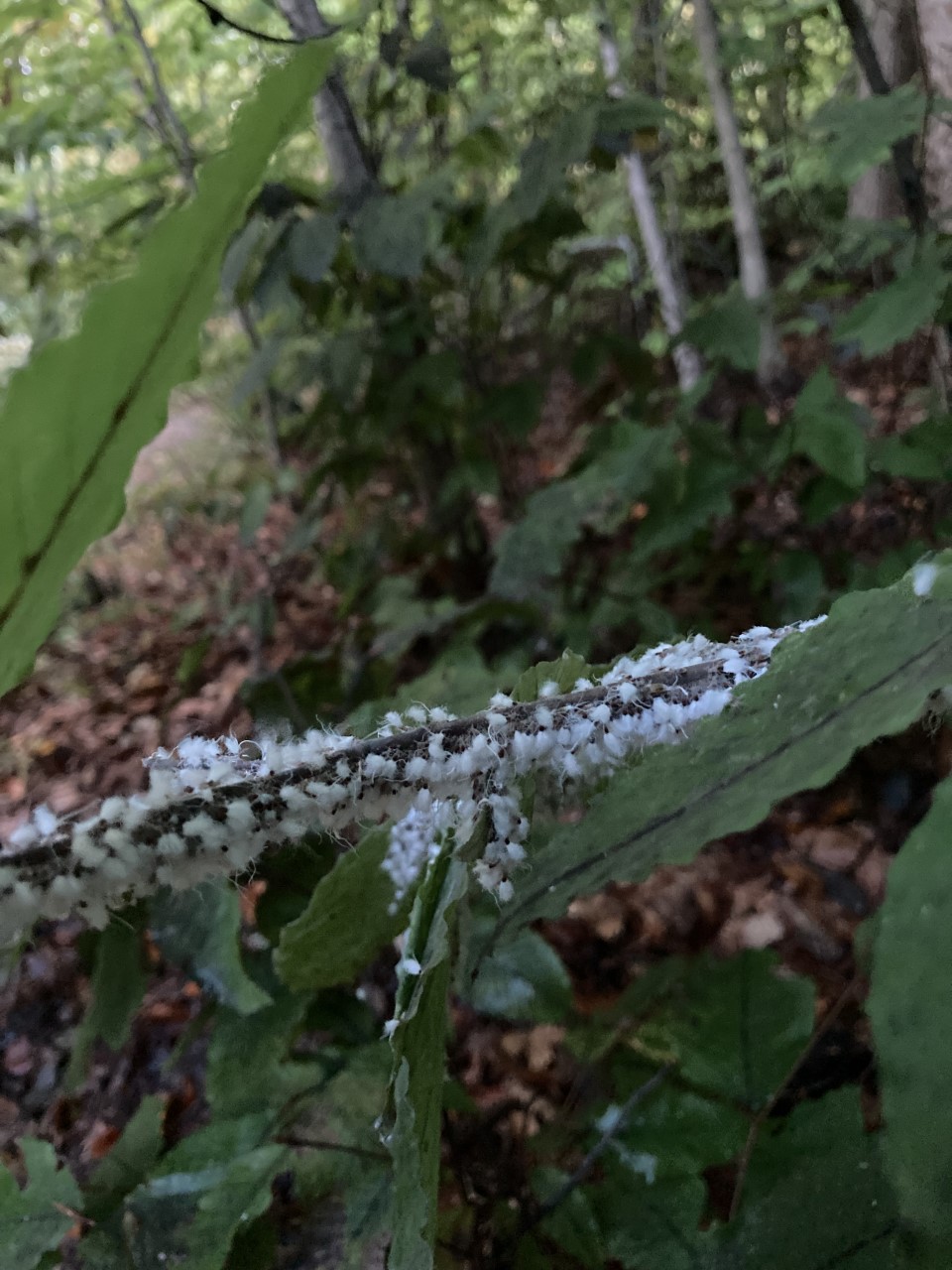 The spotlight this month falls on these charming creatures that, each fall, dance into our forests and our hearts, and perhaps for some, our nightmares. Your perception of these fuzzy little party animals may be driven by your introduction. Known to some as the ominous Beech Blight Aphid, I prefer the more light-hearted (and aptly named) “Boogie-Woogie Aphid."

Understandably, these are often confused with Hemlock Woolly Adelgid, or Beech Scale insects (see our other Species Spotlight posts; “American Beech” and “HWA”), because of their appearance. That mistake isn’t far from the mark as they are all closely related insects within the order Hemiptera. Much like the others, these aphids take on a woolly appearance due to the waxy white filaments they produce. They also feed on the sap of the trees they infest.

What really sets them apart, however, is their fascinating defensive mechanism wherein they sway their bodies back and forth in a boogie-like fashion when disturbed by predators such as birds, caterpillars, or hikers/dance enthusiasts. These teeny-tiny insects often form dense clump-like infestations, and when riled up, their synchronized wiggling takes on the appearance of a miniature heavy metal concert or the classic stadium wave. You may find this charming or horrifying, and maybe a little bit of both. While the Boogie-Woogie aphid is an especially talented dancer, this behavior isn’t altogether unique in the insect world; Sawfly caterpillars also put on a defensive group sway, and even some species of bees use a dazzling “shimmering” behavior to throw off predators.

The Boogie Woogie Aphids will first become noticeable in the Summer months, but they’re especially prominent in the Fall. Surprisingly, the jiving white masses may not be the first thing you notice when they’re near. As you walk amongst the beautiful American Beech stands at the pristine MHLC nature preserves, you may spot large blotches of what looks like soot or ash on the forest floor and understory vegetation. This is actually a growth of sooty mold, a specialized fungus that grows on the waste product (AKA “honeydew”) of the aphids. Honeydew is a sugary substance excreted by the aphids as they feed on the carbohydrate-rich sap of the trees. When the aphids gather en masse, the excessive honeydew raining down and the subsequent sooty mold patches are a surefire sign of their presence. Searching above the mold (with your mouth firmly closed at this point), you’ll notice the large masses of Boogie Woogie Aphids scattered about the branches of the beech trees.

Despite their alarmingly dense infestations, the unsightly mold, and the name “Beech Blight Aphids," these little insects are not known to be a serious threat to the American Beech tree. There are numerous pests and pathogens that do imperil the American Beech, but it seems the worst the Boogie Woogie Aphid will do is embarrass you at a party.

Large groups of these dizzying dancers have been spotted at our own Van Dyke Preserve right along the trails. Don’t miss your chance to meet them! They aren’t dangerous but do be careful not to actively disturb them by shaking the trees or branches, they are known to swarm and bite when manhandled! Just like them, your best defense here is to challenge them to a dance-off from afar.

Check out the YouTube video below to see the Boogie Woogie Aphids in action!